Read audio of November/December if you may prefer to listen…

Being arrested, spiritual support and legal observing with Extinction rebellion  and faith activist group DANCE, including A Bob Dylan Cover and love to the lovely Joshua K and Eli Carvajal and my little band of friends at London show this month. 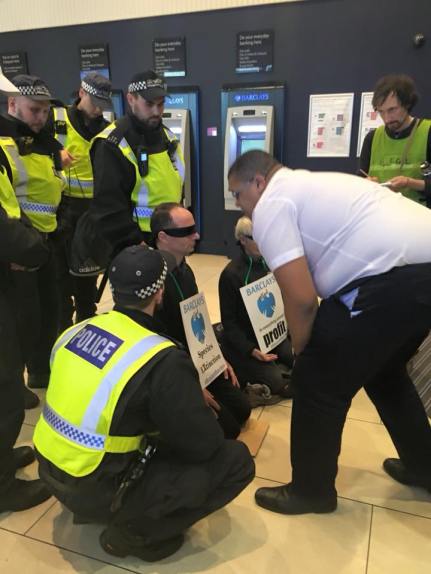 Founded by a group of activists (radio 4 programme explaining more)  in response to the IPCC report into climate change the Extinction Rebellion campaign aims to bring together a broader section of society as possible to join in voicing concern over the findings and also in their words ‘celebrating togetherness’, with music, singing, dance and arts encouraged at each event.

My involvement came after following some invitations from a friend at DANCE to join a team of volunteers offering wellbeing days for activists between actions (below relaxation by friend Karim with a song of mine at the end).

I wasn’t arrested myself, though was present in a Legal Observer role I trained for to be alongside action groups to observe and record what was happening. This is something anyone can be involved in at actions in the UK by visiting Green Black Cross a solicitors set up to aid those involved in peaceful protest.

Friends who were arrested told me that to do so in peaceful action for this cause felt like the right thing to do for them, having been trained in the run up to know what to expect. This guardian article runs the same story.

There are some who feel that maybe Climate change isn’t the issue that campaigns like this say it is, and others who find movements like this difficult for being predominantly white and middle class. I took these contemplations with me during the days of action and felt that while the first could be true and I certainly respect the second, I was touched throughout by the community and connection I felt between those who attended. To further the second It seems there is an awareness within the movement to more diversity, something I’ve understood more talking to various faith groups who are representing themselves under the campaign.

To finish I’d like to share a story. While observing in the bank, pictures above, a conversation began between the police, the spokesperson of the action and the bank staff that went something like, ‘Police: It seems everyone wants to be arrested today, people do seems passionate about this, as the spokesperson explained the reason Barclays was the host for this event being the only high street bank to still be building investments in fossil fuels. Bank staff then knelt by protestors and carefully explained they would be removed. This last 10 minutes of the 2 hour action felt particularly moving to me, it was time to go the staff had long been ready to go home, though respect was there, no criticism as the protestors were laid carefully on the pavement to cheers from an assembled crowd and free to go.

Thanks Josh for the photograph! 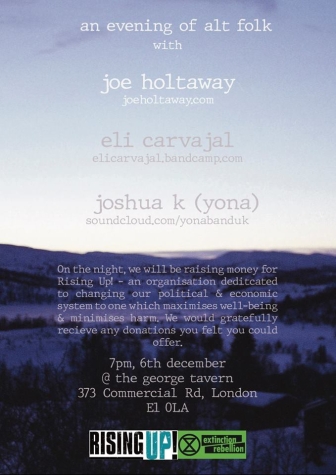 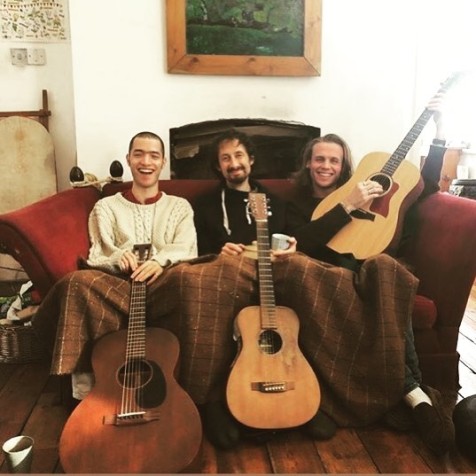 Love to Yona and Eli Carvajal – ah we had a nice night with friends at the George in London in early December – these two and their lovely sounds, here’s a recording of us singing Oxygen by Willy Mason together and my song A Little Love on the evening and two other live/demo recordings by these two wonders 🙂

and thank you Manu (Piano/vocal) Tom (Piano, percussion, vocal) and Max (flute) for playing together with me on the night.

Best wishes for Christmas , those in London in January, my friend Tom is holding a concert in aid of the homeless charity Shelter with a number of songwriters at St James’s Church in Islington on Saturday 26th January.

In the run up to it we want to share stories of homelessness; personal or contact/ conversations we’ve had with others to understand better the situation, please write if you are inspired to contribute.

Alongside the recordings in my journal pages I have recently released an ep of songs ahead of an album. You can visit here to stream and download.

Please don’t let money be a concern. Feel free to pass through the donation screen with my blessing if you would like to download any songs and have no means to donate.

Any donations will go to my recording and traveling fund – thank you. 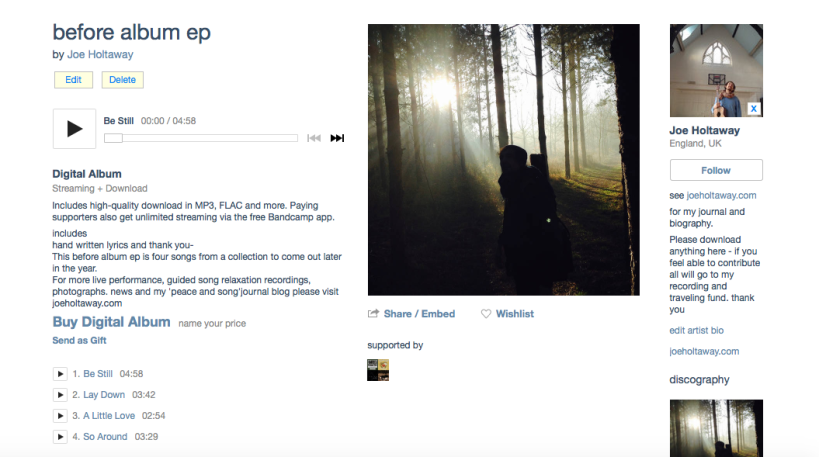